How Far Can Dualism Be Pushed?

Mises makes the following highly refreshing point: “The unconscious behavior of the bodily organs and cells is for the acting ego no less a datum than any other fact of the external world. Acting man must take into account all that goes on within his own body as well as other data, e.g., the weather or the attitudes of his neighbors.”

Note how extreme this argument is against materialism. It asserts a most unequivocal phenomenon of mind over matter which are totally unlike each other.

Mises continues: “It is feasible within certain limits to get the body under control. Man can sometimes succeed through the power of his will in overcoming sickness, in compensating for the innate or acquired insufficiency of his physical constitution, or in suppressing reflexes. As far as this is possible, the field of purposeful action is extended.” (HA, 11)

How far can we take this reasoning? Suppose I argue thus:

I object to these terms. There are no sexes, and so qualities traditionally associated with masculinity or femininity are entirely arbitrary and a rude imposition on both science and personal autonomy. Only physical descriptions should be used. Instead of “masculinizes skin, etc.” it should be said, roughens skin, deepens voice, and so on.

There are therefore no transgender people; they are, like everyone else, simply consumers of their bodies’ services.

Some people are dissatisfied with their bodies and exercise to lose weight or become happier with their physique.

Others tattoo their bodies all over according to their artistic sensibilities.

Similarly, some people enjoy having a penis and testicles, and others prefer to have them surgically removed. It’s as much an arbitrary and subjective consumer preference as preference for vanilla vs. chocolate ice cream. There is no objectively correct bodily structure; the correct structure is whatever makes one happy. If cutting out one’s internal organs and putting in various implants pleases a person, then the market stands ready to satisfy their demand. If one prefers rough skin over smooth skin or vice versa, one is fully within his / her / their / its rights to seek the gratification of his desires.

Plenty of highly skilled men armed with scalpels are eager to go to work on anyone’s body for the right price, making technologically incredible and fantastically curious alterations to it. Let transhumanism in all its forms flourish. It’s merely a natural extension of our prosperity and power over nature. The world is our oyster. The limits are disappearing. The future is now.

My main objection to this argument is that people don’t think of themselves as consumers of their bodies’ services. I neither consume my body like a kitchen appliance or chainsaw nor am identical to my body as a materialist might claim; rather, my body is an aspect of me. Materialism is false, but the extreme separation between soul and body, as if humans were angels in costume, i.e., a foreign to them “assumed body,” is not tenable either.

Further, tranny Smith knows full well that he is biologically male but “feels” like a woman, wishes that he had been born biologically female, and in “transitioning” he wants his body to look like a beautiful woman, his own concepts of beauty and femininity being perfectly ordinary and “traditional.” Smith does not want to look like a chimera according to some arbitrary fancies ungrounded in any reality but like a hot chick.

This, for example, is not how Smith the Trans wants to look: 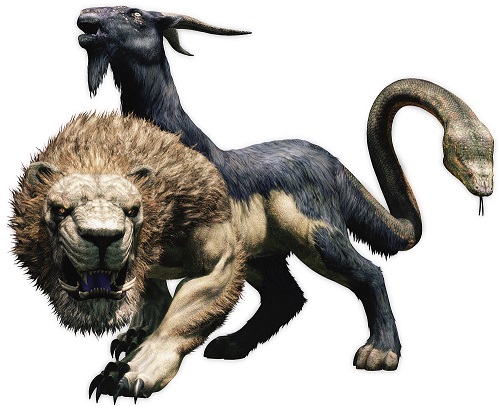 If this were how Smith wanted to look, then I think for his own good and the good of society, he’d have to be killed as an abomination unto the Lord.

Thus, sexes do exist, and both the body and soul are fully specialized, but perhaps a mismatch can occur in some cases. Or not. I withhold opinion.