Quadriformities in Relations and Economic Systems

Consider the humble square of opposition in logic: 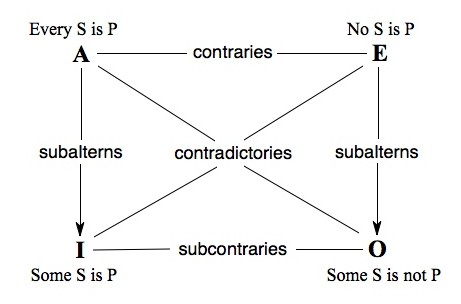 Isn’t it interesting that it illustrates or at least has some minimal resemblance to the 4 human relations and the 4 general social systems?

The human relations, in the order of increasing dignity and sophistication, are:

The social systems in which each of these relations prevails (in the corresponding order) are:

So, AO would seem to indicate hostility: if one is true, then the other must be false (Xor).

AA is obviously equality and is totally boring (Equivalence).

AI is hierarchy: if A is true, then I is true; but not vice versa (Implication).

And in IO (let’s use the subcontraries for this one), the propositions are complementary: at least one I or O is true, and maybe both are (Or). Each does its proper work in conveying truth, but neither interferes with or determines the other.

NB: these groups of 4 are not actually true quadriformities, because a quadriformity is 4 complementary things that together make up a whole.

The relations themselves are not complementary but rather hierarchical, going from the most primitive and savage to the most sublime.

Socialism is an unnatural attempt to change the entire world into an enforced universal egalitarian slavery. It bears no relation to ancient tribal equality which was a legitimate and essential economic stage. Socialism tries to realize envy, which can be primitive or more sophisticated; but it's destructive in both guises.

Duncan begins by making a distinction between positive law and natural law: There is no illegal crime of stealing involved with taxation. Instead, Machan must argue that taxation is the moral equivalent of stealing. Hence Read more…

A Path from Slavery to Serfdom

Bush notes that “within Spanish America, large numbers of slaves worked for wages, the result of the common practice of hiring out slave labor, the wages earned being shared between master and slave.” (Servitude in Read more…